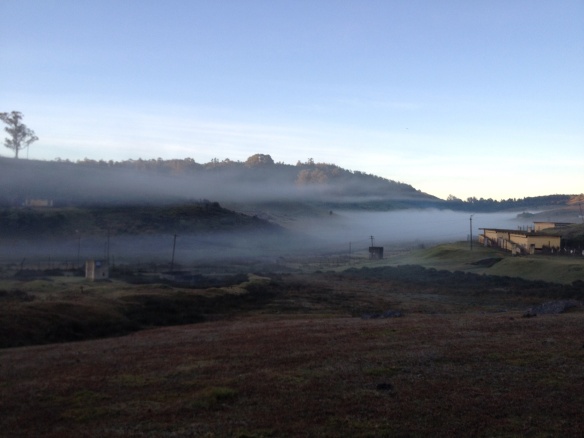 It was 5 degrees outside when we set out on this Sunday morning. There were five of us. Four doctors and one ‘almost doctor’, her having hung out with us all this while. We drove to the outskirts of Ooty, parked near a tea-shop (which was closed at this unearthly hour), and set off towards Lone Weir. The pace was brisk, as always. There were time constraints, as always! We have to choose carefully where to linger. The objective was to test our endurance as well as take in the surroundings.

It was a gorgeous winter day. The thick mist still sulked in the valley reluctant to leave as the sun began its ascent. The grass was still wet with the frost and dew. Mostly, it has been burnt a pale brown with the frost. There were miles and miles of grassland covering the gentle undulating slopes. 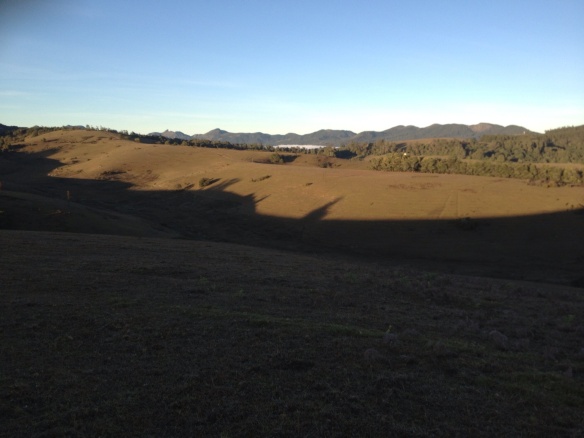 This land belongs to the Todas, a pastoral tribe in the Nilgiris. It cannot be sold or cultivated. According to an interesting paper from the Department of Anthropology, University of Berkeley, the English have seen to it that Toda pastures are not infringed upon. British motives for this thoughtfulness could have been twofold; they cherished the Todas, the ancient monuments and game preserves; secondly, the Toda pastures made excellent cover for a hunt which the English and the native Rajas maintained in the Nilgiris.  This is a blessing for us now.  Perhaps the grasslands will remain unsullied for a while yet until another reckless legal ruling comes into play. Some of this land that had originally belonged to these very tribals is said to have been bought from them by John Sullivan when he came to the hills more than a hundred and fifty years ago, for a paltry sum of Rs. 1 per acre! The British changed the ecosystem of the area when they planted exotic, water guzzling trees like Eucalyptus and Acacia in place of the ‘sholas’ and swamps which were the primary sources of the water reeds used to build the Toda houses.

We managed to negotiate the remaining swamp with some minor mishaps like getting our feet in the slush and eventually having to detour.

The remaining climb opened up to some glorious views. Distant folding hills, the sharp angles of the Mukurti Peak, the Sholas in numerous shades of green, eucalyptus glades, cypress and acacia.

We passed a Toda “Village” that consisted of precisely one house with a couple of people and some buffalos. An elderly Toda man was grazing his prized possession.

We reached what is apparently a Disaster Management tower. It was a single room built on stilts about eighty feet high with a narrow iron ladder leading up to it. With some trepidation, we climbed to the tower to be greeted by the most spectacular views. There was the Sandynella lake on one side, azure in the morning sun, the hills in the distance, vast grassland and forests under the vivid blue sky. It was awe-inspiring.

After taking in the magnificence, we headed back to the main road, stopping for tea at a shop meant for tourists. There was a boisterous crowd of young people there already. Some young men chased a poor horse and when chastised turned around to say, “We are Malyalis. We are from Kerala. We are like that only”!!!! Now what do you say to that?

A bit exasperated after that last encounter we headed to our car and drove back to go about the rest of our day. It had been a long walk, 15 Km at least, some of it on steep inclines and at that pace had been quite exhausting. Exhausting but exhilarating at the same time.

This site uses Akismet to reduce spam. Learn how your comment data is processed.