Many of us lead a certain kind of lifestyle as a result of our jobs. Some are lucky to have jobs that call for physical activity. While some of us have sedentary jobs that eventually create problems in our weight, posture, the tendency to develop muscle imbalances and so on.

What sort of job do you have? Does it call for a lot of sitting down? Eyes peeled to a computer screen? Perhaps long hours standing stationary as in the operating theatre? Long boring meetings and just walking between boardrooms? How about lunches and dinners as a part of your job? Are you expected to socialise, eat out often and entertain?

Any of these can cause problems. The problems usually start with the weight and the waistline. We forget just how sedentary we are and that is certainly not good for the body. We spend many hours completely stationary and then wonder how we got that back pain!
So what do we do?

– Device ways to move while on the job. Walk around while you dictate letters or while you are on the phone, take the stairs and walk the corridors. Here’s what I do. When I see patients in my out patient clinic, I don’t sit in my room and wait for them to come to me. I have two rooms that I alternate between. So while a patient is being prepared to be seen in one room, I am in the other, seeing another patient. I walk back and forth between these rooms all day. This not only saves me time, but also keeps me moving.
Only you know your job. If you really think about it, you CAN device your own ways to move more whie on the job even if it is just to get up and walk around the office every 15 minutes.

– Try and get in a quick per-lunch walk/run outdoors if weather permits, or in a gym. It really livens up the rest of the day.

– learn a few exercises you can do even in your office and do them.

– Ensure that you spend at least an hour of your day outside of work – working out. Cardio to get that heart pumping and strength and stretch to specifically address muscles that may be misused as a result of your job.

For instance, as a doctor, operating in the theatre all day means taking on this awkward posture of a stationary position with a bent neck, using the hands and shoulders sometimes even the neck muscles. Ensuring upper and lower back and core strengthening exercises, stretches for the chest muscles, strengthening the shoulders and arms all mitigate these postural problems that are a part of some jobs.
A person slouched in front of the computer all day is certain to develop back and neck pain if proper precautions and strengthening exercises are not followed.

Here’s the other problem. The diet!! Very often one is either eating from office canteens or not eating at all for long periods of time. Or, after the body being subjected to a long day of sedentary work, a huge meal followed by lots of TV is most often the way the evening plays out.

I think companies need to be responsible for the health of their employees and provide them with healthier choices of food even if they have to eat on the job. Canteens selling fruits, lots of veggies and salads and not just huge quantities of various kinds rice in our country. Banning deep fried food in reused oil. Herbal teas, or even the option of having tea or coffee without added sugar. Simple measures make a huge difference. Unfortunately this does not happen. Even companies that claim to be focussed on health and prevention do not offer adequate choices for their employees or more importantly provide the necessary guidance for employees to engage in a proper fitness routine.

If one has the option of taking food from home then one had better savvy up to understand food and the healthy options available. A mixed fruit and veggie salad with some protein like tofu, chicken thrown in is better than a big plate of rice and curry. All this however calls for an understanding of food and food groups so that one can make an informed decision about ones meal. You really can’t expect the cook in your canteen or any other random person to keep your health in mind!! It is your health at stake after all.

A thickening waistline is the danger of a sedentary lifestyle. Sometimes our jobs may call for very little physical activity. You then have to introduce the activity any chance you get. In addition, a sound fitness regime will prevent unnecessary weight gain. It may not be easy to include exercise into an already busy lifestyle…… But it is still a choice and the ability to prioritise.

Our tuk-tuk driver was called Mr. Moon. His tuk-tuk was impeccable, as were his manners. The white covers on the seats – pristine, the cleverly constructed plastic drape (which could be unzipped at will) all around the tuk-tuk to protect its passengers from the pouring rain. There were carefully chosen umbrellas hanging neatly inside the little space in case we came unprepared for the rain. There were even flip-flops hidden away in a little locker under the seats, stored there for emergencies. (At this point, I am reminded of the ‘autos’ back home in India. The stark contrast of the auto rickshaw driver who is usually rude and obnoxious especially when compared to Mr. Moon! His complete lack of consideration for his passenger or the man-on-the-road as he speeds rowdily through the potholes of Indian roads, splashing water on the pedestrians, completely oblivious of courtesy. Manners? What exactly is that??)

We had spent the morning at the Angor Wat and some of the other astonishing temples in Siem Reap. Later in the afternoon, Mr. Moon promised to take us to the floating village. As he pedaled off, the rain came down in torrents. He deftly jumped off, zipped us all into the little tuk-tuk, and slipped on his own plastic cape and helmet, which barely protected him as he sped along in silence. He was a silent man. In the few words he spoke to us, he told us he was just learning to speak English.

Many of the houses we saw along the road were built on stilts to protect them from the rising river in the rains.

The Tonle Sap River was murky and churning in the rain. The boat in turn swayed like a drunken monk as we made our way through the ‘village’. It was an incredible site.

Houses, restaurants, bars, a hospital, a school, even a basketball court, (donated by the US of A we were told.) floated on the mighty river. The houses even had small gardens with beautiful flowering plants. Cats and dogs sat sagely at the doorsteps watching us go by. We were their entertainment.

The mode of transport between these various boats were the smaller boats, even basins. There was a little, half naked boy floating around in a tin basin. There was another little boat, which was obviously a ‘shop’ of sorts, which sold none other than coke, beer and chips!!! As the father, (I assumed he was the father), deftly maneuvered his boat between the larger tourist boats, the little chap leapt into the tourist boats to sell his precious wares. As soon as his business was done, he leapt back into his father’s speeding boat, acrobatics that would have put a trapeze artist to shame.

There were children with enormous snakes coiled around them, floating in small bucket-like contraptions. They stretched their hands out for offerings. There were families floating along with many children in tow. Perhaps moving residence? There was a boat full of vegetables, fruits and greens. The floating vegetable market.

We reached a largish boat, which evidently housed a tourist restaurant and shop of touristy things. On embarking, we were first greeted by a large boat full of live crocodiles. They were obviously being kept there for the meat and the skin (there were several crocodile skin bags and other artifacts in the shop).

At the best of times, reptiles don’t go down very well with me. Not that I dislike them, I don’t, I greatly respect their presence on this earth. I am just squeamish. The though that these poor creatures were waiting to be used for their meat and skin only made it worse. It was disheartening.

Heading back, Nuts entertained us with stories about the boatmen, the floating village and their lives. 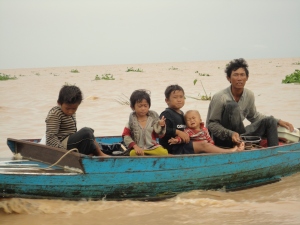 We were the voyeurs peeking in on the very real lives of these water people and children. It was a small consolation to know that at least what we paid, to take that ride, helped in some way. At least I hope it did.