This article was first published in The Hindu in May 2017.

Have you ever bent down to pick up something and had this terrible spasm in the back, knowing immediately that you’re in for several days of ‘rest and physiotherapy’? We often perform daily activities incorrectly, either because we have no idea just how to do them right, or because we are unable to do them right due to weakness or an imbalance.

Muscles exist as pairs in our body, one on either side. For instance, a pair of quadriceps in the front of the thighs that extends the knee joint. They also have opposing or antagonistic muscles that perform the opposing action. So for example, the quads, as fitness people like to call them, have the hamstrings, at the back of the thigh, that flex the knee joint. These muscles must act in synchrony for us to be able to walk, run, squat, climb and sit. If there is an imbalance between these muscles (as there often is), the result is awkward and difficult execution of movements and a resulting injury or pain.

For a pain-free, active life, we must strengthen muscles throughout the body. Without this, muscles often deteriorate and atrophy (become less) with disuse. Here are three common moves we all perform in our day-to-day life, and how to optimise them, for easy, graceful mobility.

Bending to pick up something heavy

Develop the muscles: Do the bent-knee dead lift. Stand behind the barbell (or a heavy balanced pole—for non-gym people), feet hip-width apart. Hinge at the hip by pushing the hips back as you bend forward. As you lower further, start to bend at the knees until you are able to reach and grasp the barbell in the centre. Inhale as you lower. At the lowest point of your forward bend, you should feel the stretch in your hamstrings. Depending on the flexibility of the hamstrings, some people may be able to lower the upper body quite far without having to bend the knees, while others may need to bend the knees at an earlier point. As you exhale, pick up the weight; straighten the torso by fully extending the hip and knee joint. The barbell remains close to the thighs. In the final position, stand up straight, shoulders back and engaged, while carrying the barbell. Lower again by keeping the barbell as close to the body as possible. Don’t allow the weight to touch the ground. Lift again and repeat for 8-12 times. Rest for 30 seconds and do another 3-5 sets.

Reaching up to bring something down from a shelf The right way: Stand directly beneath and slightly away from the shelf above. Reach up, grasp the object, so the weight is evenly balanced in your hands. Lower without arching the back or leaning backwards.

Develop the muscles: To develop core, shoulder and arm strength, the plank and shoulder press work well. For the plank, support yourself, face-down on your forearms and toes on a yoga mat. Keep the back flat, abdominals engaged, neck aligned with the spine, so you are not looking too far up or down. Breathe normally. Hold this position by keeping the core engaged for as long as possible. Work up from a 30-second hold to about 90 seconds. The core includes muscles of the abdomen, back, pelvic floor, deep hip and shoulder muscles.

You can do the shoulder press sitting, with your back straight or standing with feet hip-width apart. Hold a pair of dumb-bells in both hands, with palms facing forward, upper arms at the level of the shoulders, and elbows bent at right angles. Lift the weights by straightening the elbows, and push them straight overhead, so arms are parallel, almost touching the ears on the sides. Reverse the movement by bending the elbows and bringing the dumb-bells back to shoulder level. The movement needs to be performed slowly. Perform 3 sets of 10-12 repetitions at each routine. Use a weight that is heavy enough for you to complete just 10-12 repetitions.

Pushing a heavy piece of furniture 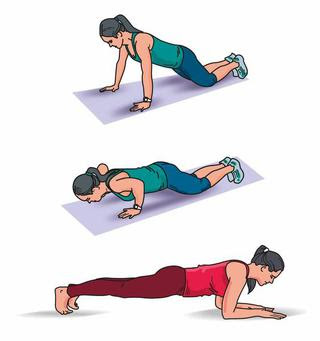 The right way: Place yourself directly behind the weight, in a staggered stance (one foot in front of the other), engage the core (tighten stomach muscles), bend forward slightly at the hip joint, place both palms on the side of the furniture, and push with the back flat, engaging mainly the chest and shoulder muscles.

Develop the muscles: Practise the push-up and plank, to strengthen chest muscles, the shoulders and the back of the arms or triceps. For the push-up, go down on your hands and knees. The palms are placed flat on the mat beneath your shoulders, but wider. The knees are placed directly under your hips on the mat (beginner), or slightly behind the hips (intermediate) or you could go up on your toes (advanced).

Breathe in and lower the upper body towards the mat, by bending the elbows. Lower the chest till it almost touches the floor between your two palms. Exhale as you lift to starting position. Repeat 10-20 times.If you feel you can’t get down on the floor just yet, start with the chest press exercise, which uses dumb-bells to build up strength in the very same muscles, then progress to push-ups.

This site uses Akismet to reduce spam. Learn how your comment data is processed.